skip to main | skip to sidebar

I cannot help but believe that this family would have been much safer (and still in business) if they had sided with the drug lords instead of the government.

Funny, isn't it, how the government claims that its War on Drugs is to protect families, yet they ruin families left and right in the process of conducting said war.

Volunteered by Aaron Kinney at 9:10 AM 1 statements

Two revolutions may have been sparked in Iran this week, one on the ground in Tehran, the other in journalism.

With the snap of cellphone cameras and the click of "upload" buttons, the job of delivering the world's biggest news story in real time switched from a few TV networks to thousands of amateur journalists posting words and images on the Web.

The shift was so pronounced that Reza Aslan, an Iranian-American author and cable-news pundit touring Denver this week, didn't even bother to follow the story on TV, which he dismissed as "a snapshot of my computer from eight hours ago."

CNN was out. Twitter and Facebook were out front. Turns out a repressive government can keep foreign correspondents from reporting, but it can no longer keep its own people, fluent in technology, from telling their own story.

As the legendary foreign correspondent of earlier eras was sidelined, the conventional TV networks resorted to putting pictures of computer screens on the air. The now iconic cellphone images of Neda Agha-Soltan, 26, fatally shot on the street, framed the political story.

The Fruits of Democracy

Volunteered by Aaron Kinney at 10:41 AM 2 statements

Democracy, like religion, always brings out the worst in people: 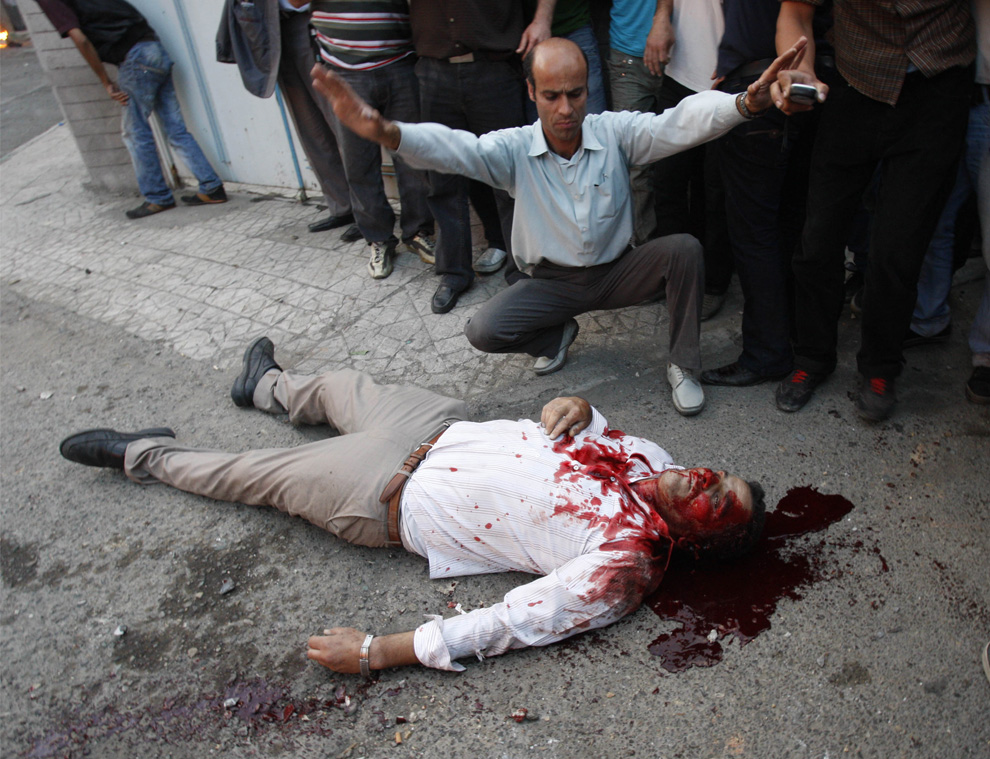 And in the comments section at the site linked above, we find the the fruits of democracy expressed in words:

war FOR PEACE WAR FOR FREEDOM.......
HELP HELPPPPPPPPPPPPPPPP
INSTEAD OF READING THE NEWS N WATCHIN D VIDEOS.. TRY TO HELP THE POOP PEOPLE IN MY COUNTRY..!!
Posted by MAYA June 16, 09 12:21 PM

And now we see the truth as plain as day: police are nothing but better-funded gangsters.

MEXICO CITY – In a hair-raising standoff that sent motorists scrambling for cover, municipal police pulled their guns on masked federal agents in one of Mexico’s biggest cities — a stark display of the tensions caused by a crackdown on drug corruption among the country’s lawmen.

“The federal officers told motorists to get out of their cars because they were afraid the city police were going to open fire,” said a state police spokeswoman, who was not authorized to give her name in line with department policy.

Volunteered by Aaron Kinney at 10:01 AM 4 statements

The government's chutzpah knows no bounds. Most freedom lovers are already familiar with the government's raiding and plundering of the Liberty Dollar outfit, and many have seen the press release that the government released on June 3rd. It reads, in part:

Acting U.S. Attorney Edward R. Ryan of the Western District of North Carolina said, “When groups seek to undermine the U.S. currency system, the government is compelled to act. These coins are not government-produced coinage, yet purchasers were led to believe by those who made and sold them that they should be spent like U.S. Federal Reserve Notes. Such claims are in violation of federal law.”

Non-sequitur notwithstanding, acting Grand-High-Poobah Edward R. Ryan's message is pretty clear when you read between the lines: Don't compete with our money system, because our money system is so weak that competition with it undermines its value far too easily, and we will persecute you for it.

So nobody better dare try to introduce a money system in this country that directly competes with (read: serves the same function as) Federal Reserve Notes, or else Hauptsturmführer Edward R. Ryan will arrest you and throw you in a concentration camp. Everybody got that? Good.

Now I'm no law expert, but I do recall reading about something a long time ago called the Sherman Anti-Trust Act, which said that if you conspire to monopolize some kind of commerce, you are are guilty of a felony. And what's more, I certainly don't recall the Sherman Anti-Trust Act making any exceptions for public, government entities. Let's turn to the always-accurate Wikipedia and see what it says:

The Act provides: "Every contract, combination in the form of trust or otherwise, or conspiracy, in restraint of trade or commerce among the several States, or with foreign nations, is declared to be illegal".[2] The Act also provides: "Every person who shall monopolize, or attempt to monopolize, or combine or conspire with any other person or persons, to monopolize any part of the trade or commerce among the several States, or with foreign nations, shall be deemed guilty of a felony [. . . ]"[3] The Act put responsibility upon government attorneys and district courts to pursue and investigate trusts, companies and organizations suspected of violating the Act. The Clayton Act (1914) extended the right to sue under the antitrust laws to "any person who shall be injured in his business or property by reason of anything forbidden in the antitrust laws."[4] Under the Clayton Act, private parties may sue in U.S. district court and should they prevail, they may be awarded treble damages and the cost of suit, including reasonable attorney's fees.[5]

Time for me to admit a few things. I'm not a lawyer. I don't know if the government is exempt from this act, although it doesn't appear to explicitly declare any exemption for government. And the state being what it is cannot be expected to apply its own rules to itself in a fair and impartial manner anyway.

But all the same, I feel this situation is worth pointing out. On the one hand, we have the government declaring that all cartels and other entities that monopolize or restrict free commerce are guilty of a felony, yet on the other hand, we have that same government claiming to be a victim of competition because the Liberty Dollar violated its money monopoly!

The hypocrisy, the inconsistency, and the arrogance of the government is absolutely unlimited. This will be nothing but a show trial in a kangaroo court.
Newer Posts Older Posts Home
Subscribe to: Posts (Atom)