skip to main | skip to sidebar

Volunteered by Aaron Kinney at 2:51 PM

The past couple days, in beautiful downtown Los Angeles, I served as a potential Juror. Before I even first reported to the courtroom, I already suspected that my individualist and market anarchist views would get me kicked out, and today they did.

In American courts, there are usually a total of sixteen jurors chosen to hear a given case: twelve regular jurors, and four alternates. During the juror selection phase, the judge as well as both the prosecution and defense attorneys ask questions to the jurors to determine their "fairness". The judge may dismiss or "excuse" any juror he wants whenever he wants, while the attorneys excuse jurors in a series of rounds. In each round, the prosecution and defense attorneys each have the option to excuse one juror. The prosecution asks questions first, and then the defense gets its turn. When a potential juror is excused from the jury box, a new one from the pool is immediately called to fill the seat. They continue this process of asking questions and excusing jurors until the judge, prosecution, and defense are all satisfied with the "fairness" of the sixteen jurors in the jury box.

The case I was assigned to was a civil case regarding an uneducated immigrant who was brought to America "illegally" to work as a live-in housemaid for a rich immigrant couple (the rich immigrant couple both are legal U.S. citizens). The housemaid is claiming false imprisonment, and wants back-wages for her work (allegedly she was paid far below minimum wage, and no overtime), as well as compensation for emotional distress.

A dozen or so potential jurors were excused the day before, with both sides asking the potential jurors many questions about their feelings on illegal immigrants, immigration laws, minimum wage laws, and emotional distress. Thinking about the way I would answer these questions, especially the questions about illegal immigration, led me to believe that I would be biased in favor of the prosecution, and that the defense would quickly excuse me. But it didn't quite happen that way.

Today my name was called. I felt pretty confident that all I had to do was be completely honest to get excused from serving. I sat in the jury box and answered a few questions from the judge about my job, marital status, etc. Then the prosecution got up to ask me a few questions. The first relevant question the prosecution asked me was, "do you have any strong feelings on immigration?" To which I replied, "yes, I have very strong feelings about immigration." The prosecution asked me to elaborate. I said, "I am very much in favor of immigration. I believe that everyone should be able to go anywhere they want, and work wherever they want, any time they want. I think all illegal immigration laws should be done away with."

This of course raised almost eyebrow in the courtroom, and some of the potential jurors chuckled or shifted in their seats. None of the twenty-odd potential jurors interviewed so far had said anything like this, and I figured that by now I was already on the defense's "no" list. But the prosecution suddenly shifted gears and asked me, "How do you feel about minimum wage laws?" It was worded in a more direct way than had been to other potential jurors. I replied, "I don't believe in the minimum wage."

Again eyebrows raised; nobody had said anything like this before either (although previous questions about minimum wage hadn't been this focused on the principle of it). The prosecution half-chuckled, paused and said, "you have some interesting views, Mr. Kinney. Why don't you believe in minimum wage?" I suddenly realized something that I hadn't until that moment: my anti-minimum wage views would also put me on the prosecution's "no" list! I dutily replied, "because it restricts the ability of the employer and employee to agree on a contract that is consensual and mutually beneficial. It hurts the poor."

The prosecution didn't seem to believe me, and quickly asked, "but how can you judge a case according to laws that you are so philosophically opposed to?" I wanted to respond with something much more pointed, but instead shrugged my shoulders and said, "well, that's government."

The prosecution then asked if I was opposed to payment for "emotional distress," and I replied that I believed that emotional stress is real and when it happens there should be restitution. But by now the prosecution seemed to have its mind made up, and shortly ended it’s questioning.

The defense had no questions for me. I wasn't surprised.

It was then time for the next round of juror dismissals. The prosecution went first, and promptly dismissed me. Since it was my third day at the courthouse, my service was completed. I left the courthouse feeling very happy.

I spent the next few hours walking around downtown Los Angeles and taking pictures with my camera phone. I will post some now. The first six pictures were taken in early April on a cloudy day, and the rest were taken the past two days when it was warm and sunny.

Hint: Hover your mouse over the image to get more info about it! 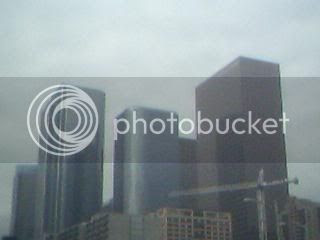 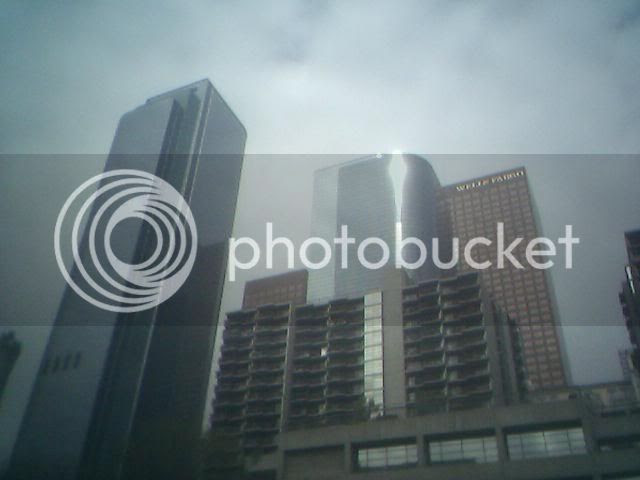 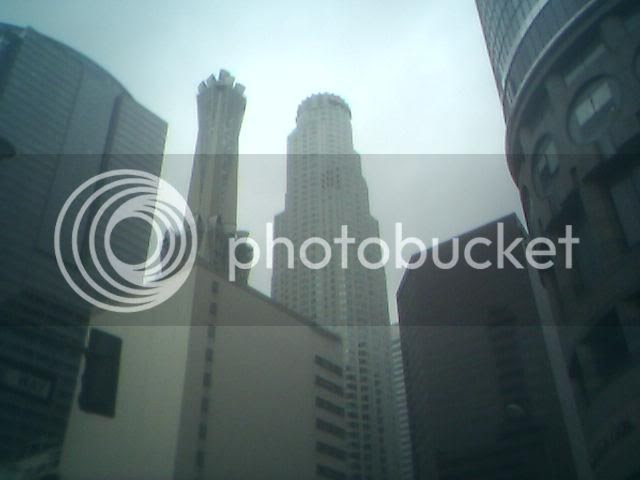 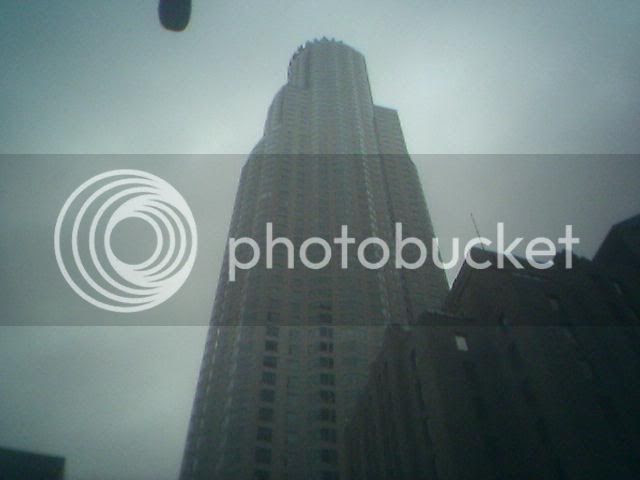 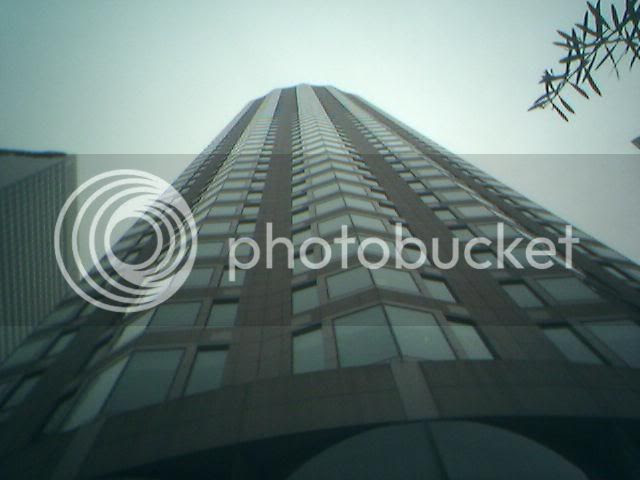 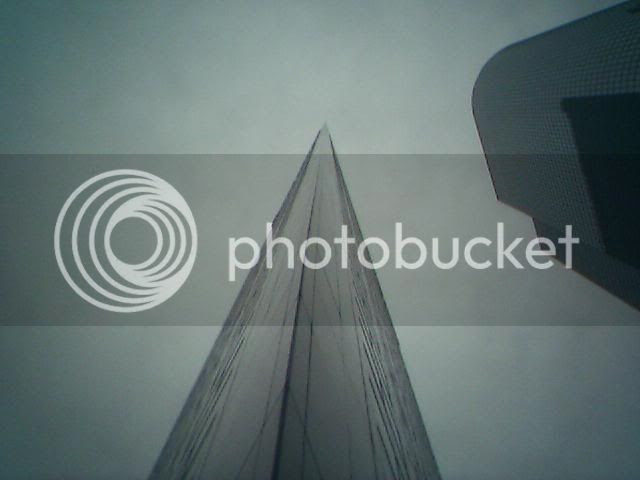 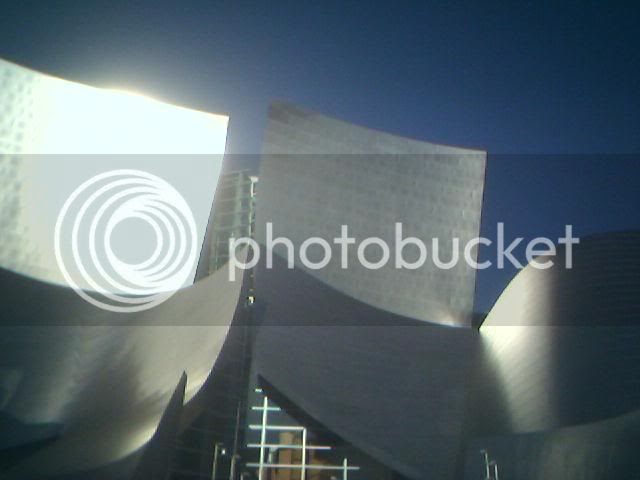 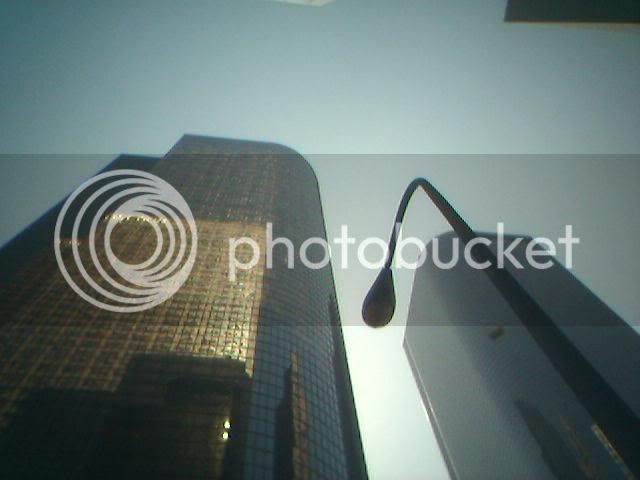 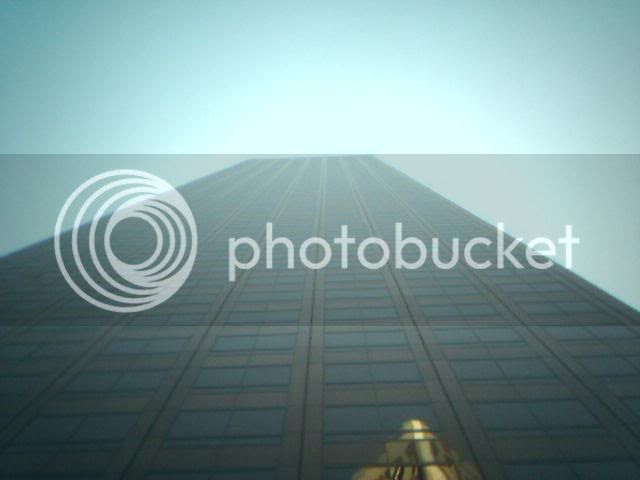 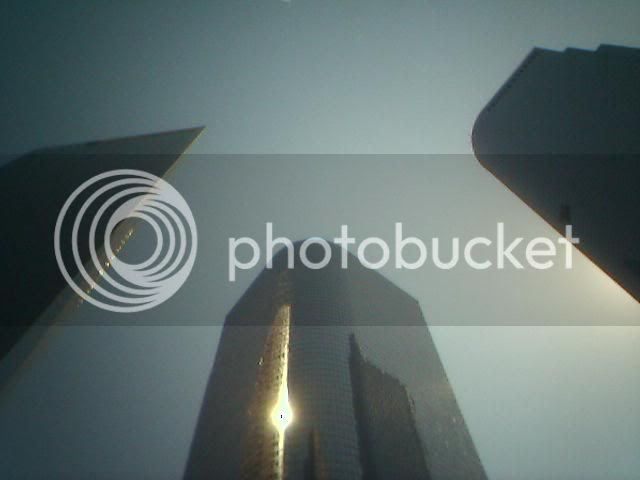 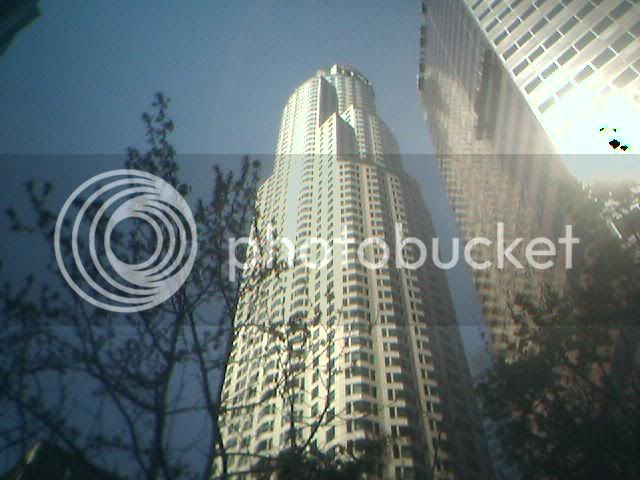 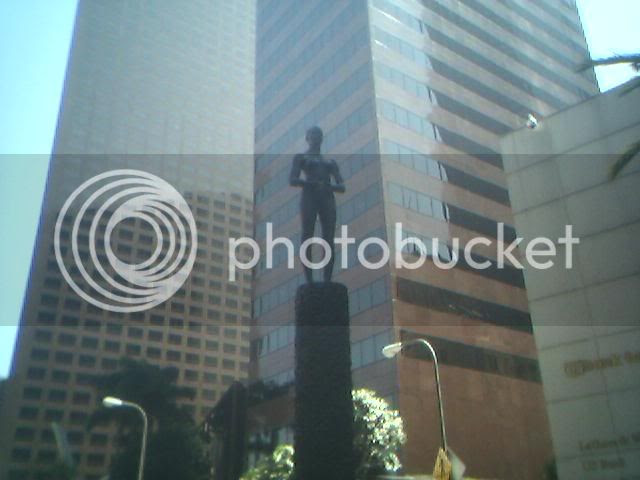 A note on the last picture. The US Bank Tower is built in a hilly area of downtown known as Bunker Hill. At the base of the tower is a 103 step concrete staircase with a fountain running in the middle of it. At the top of the staircase is this pedestal with a statue of a woman on top. The camera phone doesn’t have that good resolution, but this statue is extremely anatomically correct. Its just that I was surprised to see something that was, to me, such an honest piece of art.

Interesting, honest account. I'm glad you weren't ultimately selected, because you probably would not have followed the legal instructions, due to your strong philosophical positions, even if you think you would have. I pick juries for a living (as a trial attorney) and I found your story typical of many problem jurors, particularly in civil cases. We attorneys have far fewer juror strikes (without a legal bais) than most people think (it also varies by state). But jurors often think that they can just announce a likely bias, and then back away from the ultimate conclusion (that they probably wouldn't follow the law) and then "leave it up to the lawyers" to understand to take them off. Guess what? If a juror says, ultimately, that they will "follow the law" most Judges will not regard their prior, likely bias statements as "cause" to remove them, as they have "rehabilitated" themselves. So, jurors who are obviously unsuitable for a case may get on the jury, because one side or the other has to use a "no cause" (or peremptory) challenge to get them off --and sometimes won't, because they have to use it on someone even worse for the case. So, a good start, but PLEASE if you get picked for another jury (or anyone out there with strong ideas) don't overestimate your ability to be "fair" (or follow the law) when the reality is, you have very strong ideas on the subject matter, you will think you can, but really won't. A "hint" to the lawyers is nearly worthless. You have to own up to ultimate conclusions of your ideas, which makes the process fairer for everyone. For example, you may have no similar problems in a criminal case.

Thanks for the input, Anonymous trial attorney :)

I must say that I agree with your analysis about bias and following the legal instructions as a juror. I probably would have been too biased to follow all the legal instructions properly. And boy am I glad, because it reduces my likelihood of wasting time listening to state monkeys argue about why some peaceful person needs to go to jail.

Sadly, I just received another juror summons in the mail yesterday. Let's hope they kick me out AGAIN :-)